Is This Error Device Specific 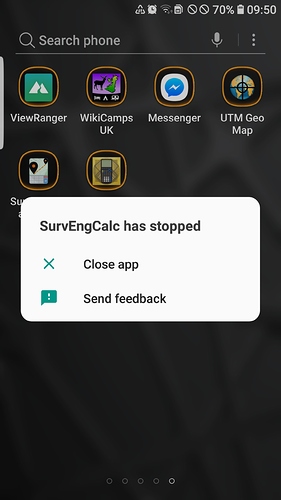 Is SurvEngCamp an app compiled with PhoneGap?

Hi George, thanks for getting back to me. Yes the app was compiled with PG. I’ve not long received a crash report through the Google play Developer consul (for some reason it takes about 24 hours to come through) and it was for: ListCanvas.throwifCannotDraw I did a bit of re-search online and found that the general consensus was that this is to do with images, mainly splashscreens. The error that was shown in the png that I provided was happening upon launch of the app so it made sense that it was a probable splash screen error. I checked the splashscreens for size and labelling and found that I had a typo in one of the labels i.e dawable when it should have been drawable. Anyway rebuilt app through PG and put back as an update on Google play and I’m now waiting for a response from user to see if this has cured the problem. As far as I know this has only affected Samsung Galaxy S7. This sort of thing happens when I don’t put my glasses on

Good work - the Google Play Developer Console can be a lifesaver!

This topic was automatically closed 10 days after the last reply. New replies are no longer allowed.