AppStudio 8.5 Beta 4 is ready for testing. We’d like to get some people to try it before release.

The biggest change is that we have updated the UI library used by AppStudio (wx). It has a lot of little fixes and cosmetic improvements.

There is a long list of improvements and fixes:

Here’s is what is new:

Breaking change : When running as a native app, the Cordova library is used instead of the browser’s. That means the database data will be saved in the file system and not in the browser’s sandbox. Please check where your app is saving the data: you may have to consider a migration strategy if you are affected. Please contact support@appstudio.dev if you need help. The need for this changed comes from Safari changing support for WebSQL. This does NOT affect web apps.

As usual, let us know if you spot anything unusual!

I’m getting this error Uncaught ReferenceError: Form1 is not defined at Object.NSB.preMain (appstudioFunctions.js:2268) at (index):2402

I dont have a Form1, works ok on the previous version of AppStudio.

Would you be wiling to share your project so we can have a look?

If so, please send it to me directly.

Hi, its the same project i sent you previously if you still have it?

Sorry - we don’t keep these around any longer than is required for the specific problem we are looking at.

Does this help? My first form is named Home, (not form1).

The above is from the Chrome console error, found in nsb/library/appstudioFunctions.js

Will we still have to do a full deploy before doing a refresh deploy?

It seams to be fixed, thank you. 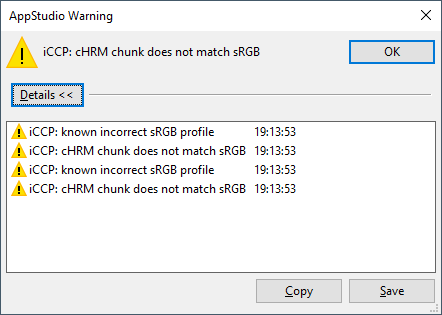 What can I send to help get 8.5 installed?

Does it make any difference if you do a complete uninstall?

Are you on Windows or MacOS?

In the instructions for the total uninstall, it is not clear what registry key to delete:

Are we deleting the NSBasic key or just the App Studio key? And obviously not the HCU or Software keys. I deleted the former (NSBasic key). I was going to suggest spelling out HCU, but if you’re in regedit, then you better know WTF you are doing and what HCU is.

Other than that, it installed and I was able to bring up my main project. I ran it under start in desktop and it is acting oddly. EG, it works in 8.4.2.0 and not in 8.5 beta. I will hunt this down, as it looks like a logic error - hmm.

The 8.5 beta problem I believe is the same as AppStudio 8.4.2 won't run. I think it exemplifies the reasons for never releasing two versions with the same version number, especially when the difference between them was a major installer change.

I forgot to reset my port number in the Advanced section. All appears to be working fine.

I did find that for the move from Bootstrap 4.4 to 4.6 that is in 8.5, that the Bootswatch themes were updated, but only to 4.5, not 4.6. 4.6 appears to be available from the publisher on their github. The publisher also says it is very important to keep the versions in sync.

Thanks - we’ll update the themes right away.

@Pro_Certs: are you using one of the samples for this? Or your own app?

@GaryGorsline - we’ve just uploaded Beta 6. It has the updated Bootswatch themes. Thanks for spotting this!

I’ll try and reproduce it with a blank project.

I have sent you a test project which reproduces the 404 error.