Re: “Phonegap”
Meanwhile I found what was the reason for my mentioning this. In the Technote “Submitting to the Google Play …” you will find this:

Help files still using phoneGap are a bit irritating when you try to find where an error comes from and waste your time exploring things that work indeed but appear as if they could not work.

phoneGapBuildCounter is the name of the project property with the version number. You’re correct: AppStudio has not been updated use the new name.

Changing this will mean change to the save file format of AppStudio apps. This is best done when there is a major new release of AppStudio.

@Support: Thank you.
Meanwhile I (think I ) followed the VoltBuilder instructions again until the end and tried a new build with VoltBuilder. These are the last lines of log file:

Does “new release” mean that only an update to an (in Play Store) already existing app is expected and possible?

I notice this in the line:bulit the following app: app-release.apk
Is this correct?

Could be. I do not know why the apk is named app-release.apk and what happens after this build in order to produce an .aab bundle. When I make AppStudio build an apk, then it is named PianoCalc.release.apk.

Hi,had post similar message before.told that msg was from play store.might be due to submission in permission section at playstore.haven’t try out yet.will post here when got access to pc tonight. Best rdgs,tst

Thank you. Interesting. But: missing permission leading to file not found error?

Well,i might be wrong.but i can’t do any verification now… 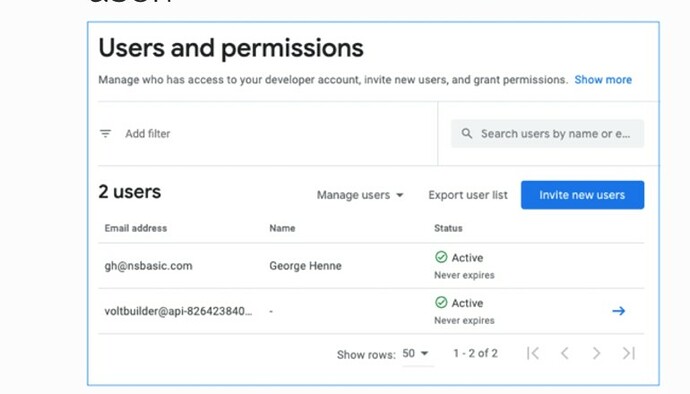 Do u have something similar in your playstore setting…

The above pasted line tells me that authentication was successful.
The following log lines seem to say that they cannot find a package named de.bsommer.pianocalc.
VoltBuilder states, as I understand, that they will build - now instead of an apk - an aab bundle and upload this xyz.aab to Play Store. Maybe VoltBuilder support can explain what caused htttpError 404.
Yes. I see something displayed like your screenshot. User VoltBuilder is active.

May both of us suceed in this playstore stuff,cheers!

Perhaps because of antivirus software.it blocked the traffic between playstore n our pc.

I had not thought about this yet. Good idea. But now I stopped my IS software and got the same result/failure and same error message.

In voltbuilder web site,if I login using google mail (...@gmail.com),I am greeted with ’get started with voltbuilder free plan. If already log in , and go to preference ,the ‘copy api credentials to clipboard ‘ blinks and gone. Then choose your plan page appears.although i can output apk,but i believe my voltbuilder plan is not fully functional,as such.playstore couldn’t get the correct bundle from the sending end.(my pc)…

The problem might be that Google Play store requires an .aab file.

We’ll have a new build of AppStudio which makes this possible today or tomorrow.

@Support
Thank you. Aab is required since Aug 2. I thought that AppStudio already had updated. Take your time. There is no hurry. I am just exploring possibilities.

We have these menu items: 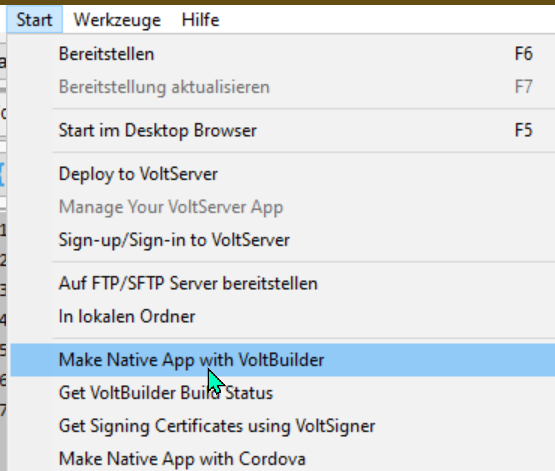 It could be nice if we had two possibilities and two items for Voltbuilder:

The first item should do what it currently does. Good for tests and one can distribute without Google.
The aab item should build an aab which can be saved locally, uploaded or sent directly to Play Store.

Currently one needs to delete the Google Play Key and Track properties in order to make VoltBuilder build an .apk.